I really only have one thing to talk about this week, because it's pretty much all I've been doing haha. You know that course I'm making, Newbie Coder Problem Solving School? Well, the beta students are THRILLED with the content and the feedback has been so helpful. 🥰

This is a big deal for one big reason: I was terrified the whole time that I wasn't going to be able to deliver enough to help you as much as I wanted. I don't know why—it was probably just my anxiety brain combined with low self-esteem or whatever. But it was real, and that imposter syndrome was what took me so long to get it out even as a beta. Now, I know better... because I have proof!

I'll have some testimonials soon as people wrap up the course, and I want to have a call with folks to get some live feedback... and then I'm (yes, I... I do all of this on my own as of right now bc I'm broke lmao) starting the arduous task of recording and editing the course.

Folks... making a course is some of the hardest work I've ever done. It didn't HAVE to be this hard, but I do the most because I love you and want to be sure you're learning important things from me! But do NOT let that stop you. It's also been one of the most joyful journeys I've embarked on, and I can't wait to see the difference I can make in the community. It's already starting, apparently! 😉 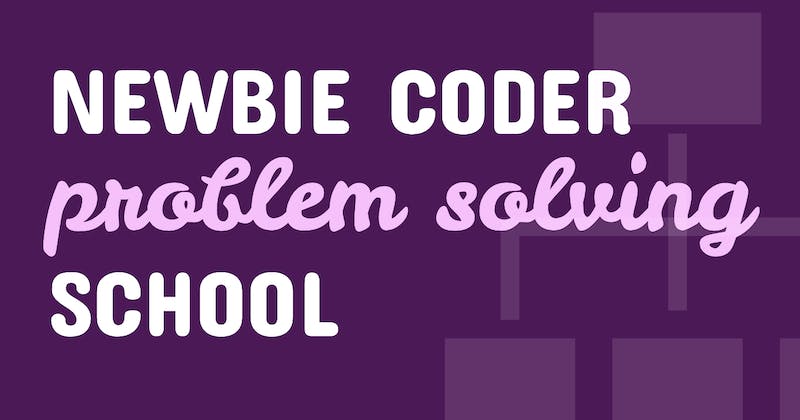 My new course, Newbie Coder Problem Solving School, is currently available in its text-based version until Friday, February 29. You can pre-order right on the site. After the 29th, you won't be able to purchase the course until March 27th when the full video version of the course officially launches.

This is a big deal, because when the course launches, I've actually decided to raise the price to $249. So you'll definitely want to get in on the beta to lock in the lower price. As a beta student, you'll be required to submit feedback on the course as you go, and before February 25th.

Of course, you'll get all future updates, including the course videos once they're finished in March. And there's finally a date... the official NCPSS course launch is set for March 27th, 2020!

Tune in on Tuesday 2/18 for a new episode of the La Vie en Code Podcast! This week we'll be talking about overcoming "blank screen paralysis".

What's "blank screen paralysis"? It's that deer-in-the-headlights, freeze-up response you may have to starting a code challenge or project from scratch. It's not the end of the world! In fact, it's completely natural when we're facing new things, and it only means you don't have a clear first step. If you identify with this at all, you definitely want to catch the episode!

You can find the podcast on iTunes, Spotify, and Stitcher. Of course, if you enjoy the episode, please leave me a ⭐️⭐️⭐️⭐️⭐️ review and a kind comment. I love hearing from my listeners. 🥰

🎟 Grab your early bird tickets to Codeland Conference in NYC from July 23-24! It's one of the dopest conferences I've been to, and I'll definitely be there this year. A lot of your Twitter friends and stans probably will be too!

📝 Some really helpful and supportive freeCodeCamp forum posts (go sign up even if you don't use FCC!):

📝 What I learned by reading The Pragmatic Programmer (by Pramono Winata)

📝 5 CSS interview questions one should know (by @hellonehha)

📝 Top 10 developer skills that'll make you a hero—hint: it involves LEGOs (by @jpdelimat)

📝 10 important Git commands that every developer should know (by @cem_eygi)

📝 How to install and start using TypeScript (by @jj_goose)